The following article was written by Reuters news

(Reuters) - Saying "I, too, am a dreamer," Fidel Castro led a day of homage to John Lennon yesterday in a cultural about-face by Cuba's communistic authorities, who once frowned the music of the slain Beatle as decadent Western influence.

To the musical backdrop of All You Need Is Love, Mr. Castro, dressed in his trademark military fatigues and aided by star Cuban singer Silvio Rodriguez, unveiled a bronze statue of Mr. Lennon sitting on a bench in a Havana park. 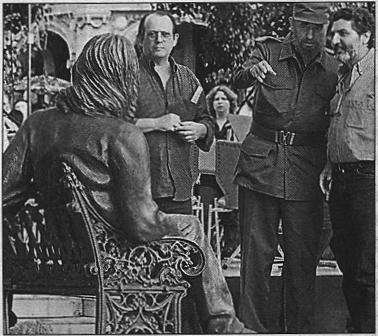 "What makes him great in my eyes is his thinking, his ideas," Mr. Castro told reporters after the ceremony, which was timed to coincide with the 20th anniversary of Mr. Lennon's murder in New York.

"I share his dreams completely. I too am a dreamer who has seen his dreams turn into reality," added the 74-year-old former guerrilla who took power in the 1959 Cuban Revolution.

Other honours for the Beatles star included a documentary by Castro's personal cameraman, Roberto Chile, tributes from state media and an open-air concert on Friday evening in Cuba's "anti-imperialist" arena opposite the U.S. diplomatic mission.

In the 1960s and 1970s, Beatles songs were considered "ideological diversionism" by Cuban authorities. The Fab Four were barely heard on the island, with the exception of clandestine parties where smuggled tapes might be played with the lights off.

In the still tightly controlled but culturally more liberal Cuba of today, Mr. Lennon is cast as a born rebel and victim of U.S. harassment. Friday's honours were intended to "integrate Lennon into the patrimony of the cultural values that our people admire and respect," an official statement said.

"Declassified FBI documents have made public the aggression he suffered for his radical position against the Vietnam War during Richard Nixon's administration," it said.

The Communist Party daily, Granma, put the Beatles on a list of the most "relevant" figures of the 20th century last year, below Castro, Russian revolutionary Vladimir Lenin, and guerrilla leader Ernesto "Che" Guevara.