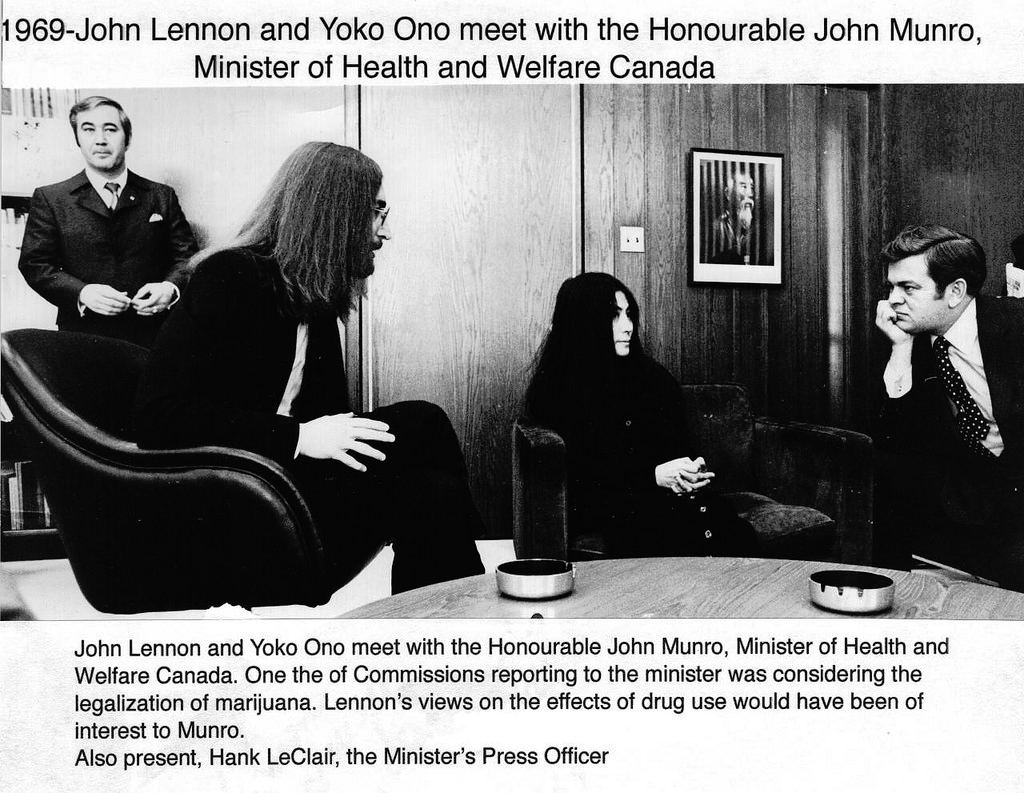 Gaudy green streamers laced with silver tinsel clash with both taek-and-leather decor and the demure couple clad in pitch from head to toe.

And John and Yoko Lennon keep emphasizing how they've never talked with real live politicians before.

Health Minister Munro, who's far more at home in the setting, lounges in a navy pin-stripe suit and grins sheepishly at the Lennon's testimony that he really is "with it."

"Like the whole generation, we've mistrusted politicians," says Lennon in that clear but monotonous Liverpool brogue.

But then he read Mr. Munro's speech to the council on drug abuse wherein the minister quotes Beatles lyrics, claims to believe what young people say about marijuana and decries "giving criminal records to several thousand curious kids" for smoking pot.

Tuesday morning the Beatle and his wife talked with Prime Minister Trudeau for 50 minutes on topics ranging from "peace to drugs and drugs to peace."

That was followed by a 1˝ hour chat with Mr. Munro in which the couple let the minister in on a Zen Buddhist diet and promised to be on call if he ever needed them to assist in the war on hard drugs.

"It's really been quite a remarkable day for us," Yoko Ono said softly.

Now the Lennons are faced with one more challenge.

"We've got to transmit to the young people that we've met some human people in The Establishment...and convince them that we didn't sell out in the process," said Lennon.

Mr. Trudeau and Mr. Munro gave them hope, Lennon explained. That kind of hope must be transmitted from inside and outside The Establishment to kids who are in a state of post-drug depression, he said.

"Once you've experienced that awareness it's harder to face reality afterwards."

Lennon said he and Yoko were out of the post-drug depression phase, but that masses of kids are still faced with the paranoia that follows a drug trip.

Lennon said he still uses marijuana occasionally and would like continue to do so for the rest of his life "just like most of this generation."

But, the campaign against drug abuse can't help but assist the Lennon-Ono peace campaign, said Lennon, since "we can't sell peace to people who are hooked on drugs."

He said he was impressed that the commission of inquiry into drug abuse, set up by Mr. Munro, was a humane and realistic body that would research the issue honestly and not mislead either young people or the public-at-large about its findings.

He said he has the same feeling about the peace campaign as he did about "the Beatles being bigger than Elvis."

"At the beginning we thought that maybe we were too naive and that we were wasting our time," Lennon recalled.

But six months after the Montreal bed-in, the Lennons began receiving feed-back that indicated their campaign was being well-received.

"We won't fight The Establishment, we'll grease it -- that is, use its own methods," he explained.

They told Mr. Munro not to be discouraged by the hostile reactions he has received from university audiences he has addressed.

They advised the minister to carry his own placards, proclaiming his humanity, when confronted by sign-waving students.

He thanked them heartily for the suggestion, and asked for further advice on how he might bridge the communications gap with young people.

"Be truthful and honest with them," the soft-spoken couple reiterated.

They said it was just the beginning for Mr. Munro's politics as it was for their peace struggle.

Sooner or later the truth according to Munro would ring home, they said. Then, according to Lennon, it's just like the pop music world.

"You build up a catalogue of records, Mr. Minister. When your third or fourth record is a hit, they'll go back and buy your first ones."

Rumors that the Beatles Apple Corporation will be moved to Canada come as no surprise, given the enthusiasm for this country being voiced by John Lennon and his wife, Yoko Ono.

"We have great hope and love for Canada," Yoko told Health Minister Munro when the couple visited him for two hours Tuesday.

"It's the only place on earth where people have asked us for help in the cause of peace and where we've received tangible offers of help," claims Lennon.

While the Lennons were in Ottawa, it was mentioned by some sources that Apple Corporation, an entertainment organization set up to back young performers, would be moved from London to Toronto. The company has been reported as suffering financial set-backs over the past two years.

Yoko interprets the United States' refusal to admit Lennon into that country as a fateful move which brought the couple to Canada.

Lennon feels Canada's acceptance of U.S. deserters is the best move ever made by this country. "Canada hasn't had time to degenerate," said Yoko, "while the other countries are all jaded now." 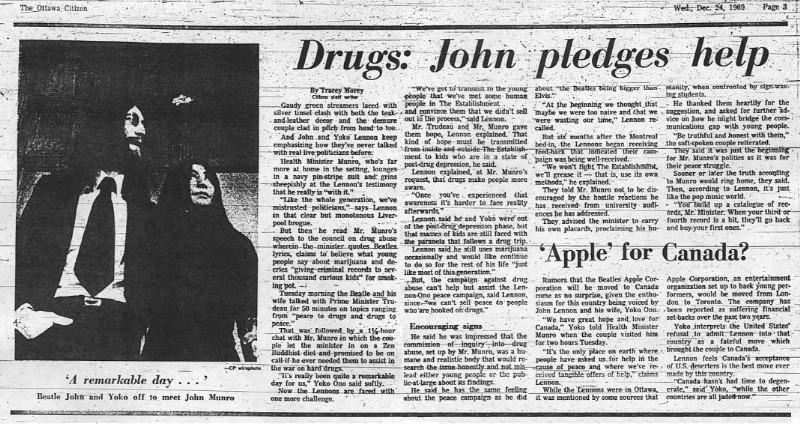 ACKNOWLEDGEMENT: The Ottawa Beatle Site wishes to give special thanks to The Ottawa Citizen for allowing us to e-publish their article which appeared on Wednesday, December 24, 1969. Copyright 1969 by the Ottawa Citizen, all rights reserved.