Images scanned from microfilm from the Ottawa Public Library. They were then edited down and then specially pasted together for this presentation. 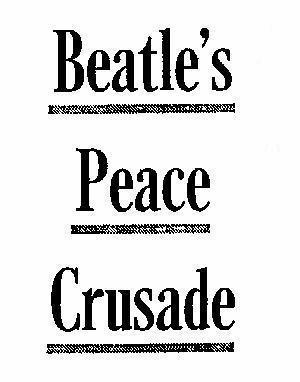 John Lennon's weapon in his battle for peace is the media.

For seven days and seven nights, the Beatle and his bride Yoko Ono met the press from their bed in his suite in a Montreal hotel.

It was in this environment that I spoke to John and Yoko last week and then again during their fleeting visit to Ottawa on Tuesday.

John plans his crusade for peace to last about five years. "That's the goal Yoko and I have set."

"Today gimmickry is the only way to sell a product. If enough people see a TV commercial on soap, they buy it. The product we are selling is peace."

Lennon is against violence and militant demonstrations. "We're against killing of any form. If we can get our message of peace across to the young and to the housewives, eventually the husbands will be influenced."

"Of course I'm not saying if someone punched me I wouldn't retaliate. After all I'm human, I'm no Jesus -- turn the other cheek -- but I don't think I could kill anybody."

The rest of The Beatles support John in his desire for an end to war. "George is the closet to us in our quest for peace, Paul is the intellectual, the thinker, and Ringo is just Ringo, for peace, in his own quiet way."

John believes that history books should be eleminated completely from schools.

"All the young people are being taught about Hitler; Alexander the Great -- the great killers. How many history books teach about peace?

"What's past is past, we're interested in today and tomorrow, not yesterday."

John does not see himself as a politician. "My contribution is merely to make people think about peace. But I will back any politician running on a peace platform."

"The press, radio and television are helping us get our message across to people -- we couldn't do it in the streets, that would cause chaos. So we're doing it from our bed. I've got quite a few more gimmicks up my sleeve to try next.

The Lennon suite was such a hive of activity last week that, on several days, almost all the telephone lines at The Queen Elizabeth Hotel were tied up.

All calls were accepted and they were coming from far and wide. During interviews, the phone would interrupt proceedings and John would talk to reporters in Los Angeles, Vancouver, New York and London.

"We never dreamed when we came to Canada that we could reach so many people in such a short space of time. Even if we don't get into the U.S. we know we can carry on from here.

"I'm no martyr, Yoko and I just believe in what we're doing. If the world can put a man on the moon -- and some said it couldn't be done -- why can't we have peace?"

Copyright, 1969 by The Ottawa Journal. All rights reserved. Used with permission from the author.