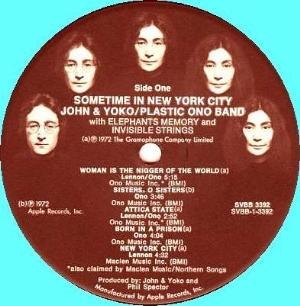 Some Time in New York City

Has anybody remembered that this month is the 25th anniversary of John's "Some Time" album? One more listen, anybody?....

When this album was released, it was universally derided as the worst example of self-indulgent triviality that John had produced. It was critically slammed and a commercial embarrassment, selling only 100,000 copies. It was said to be lyrically banal and insincere, and worst of all, it featured Yoko on several tracks: seems that no one likes the sound of her voice. How could John use such poor judgement and release such a stink-bomb?

... Pet-projects aside (bed-ins, avante garde art shows, "experimental music") John had never before failed as a serious songwriter. That's important to remember: Until September 1972, when "ST" was released, John had an unbroken streak of nearly a decade at the top of the pop world. And he took no time off: John prolifically released several single and album tracks per year, even in the tumultuous years of '69 and '70, during the Beatle breakup. This is in distinction to his former partner McCartney, who was a critical disaster in the immediate post-Beatle years although always outselling John and equally prolific. With John's first two acclaimed solo albums and flurry of singles, he successfully abandonded his Beatle image and invented a new image for his solo career (interestingly, the only Beatle to do so) while still maintaining his Midas touch with record production.

This was John's reputation when he expatriated to America in spring '72 (to help Yoko win custody of her daughter Kyoko from her ex-husband, then living in the USA); he was immediately befriended by left-wing radicals who recruited him for their political purposes. 1972 was an election year, and Richard Nixon was a profoundly polarizing public figure: very few politicians are so intensely hated by their political enemies as Nixon. John's radical politics were well-known ("Power to the People", for instance, was his top-ten single in spring '71) and he eagerly joined the movement. Lennon shortly abandoned the leftists' revolutionary program - such as a planned demonstration outside the Republicans' August convention - but not before he wrote and recorded the tracks on "Some Time". Lennon had imagined himself in the same role that Dylan had successfully adopted in the 60s: using popular music to chronicle the headlines of the day. Lest his point be missed, the album cover of "ST" purposely mimicked the front page of the "New York Times".

The tracks deal with the imprisonment of communist Angela Davies ("Angela"); John Sinclair ("John Sinclair"); the Attica State prison shooting and northern Ireland violence ("Attica State" and "Sunday Bloody Sunday"); the problems in Northern Ireland ("Luck of the Irish"); the subjugation of women ("Woman is the N***** of the World"); and of course John's own recent personal adventures, which he always assumed would interest his fans ("New York City"). Yoko's contributions included a feminist anthemn ("Sisters Oh Sisters") and an oddly-phrased plea for universal oneness ("We're All Water"). A companion disk was included featuring J&Y jamming live with Frank Zappa, making "ST" a double-album. As previously noted, the critics savaged it. John's fans didn't care for it, either; it was the poorest-selling of all John's solo attempts. The single, "Woman is the N*****r of the World", was equally a flop, failing to chart in the top 20. (Interestingly, the single from "POB", "Mother", sold equally poorly, although "POB" itself cracked the top ten.) John even said himself that the tracks were "garbage", as he'd just "stick his head out the window to see what everyone was saying", instead of concentrating on his personal feelings and impressions, as on "POB" and "Imagine". Retrospect shows that this began a two-year lull for John, as his personal life disintegrated and he produced generally mediocre (or worse) records. Even his excellent anti-war single, "Happy Xmas", was a commercial disaster: released in December '72, it was introduced into stores too close to Xmas to generate sales. Since his murder, "Happy Xmas" has become (arguably) rock's premier Xmas tune, in power with "Give Peace a Chance" and "Imagine" as John's best-loved songs; but 25 years ago, it represented yet another missed opportunity.

I first heard "ST" in summer '79. It was the last of John's solo records I bought, since I expected such low-quality work. It certainly isn't his best work, but there's lots to like about it. The quality that stands out most is the *tunefulness* of many of the tracks. Forget about the lyrics (we'll deal with those shortly): the melodies and performances *sound very good*! The orchestration is sparse, but not as sparse as on "POB": John wanted this to be a rock and roll album. And the tuneful rock songs he wrote (lyrics aside) are very entertaining. The celtic sounding "Luck of the Irish" is sung and played exquisitely, and could be pure McCartney. "Angela", with its bluesy saxophone, is also very affecting. "John Sinclair" is a blues number, played with a nice slide guitar and one of John's trademark odd twists: the repeated "got to/got to/got to/...set him FREE!" which destroys the timing of the chorus, but somehow works perfectly. (Note: The acoustic version, played at U. of M.'s Chrysler arena, is even better.) The hard-rocking "Sunday Bloody Sunday", "Attica State", and "New York City" could have represented - with different lyrics - John's best solo r&r work. His voice is outstanding, the arrangements are inventive but not overlush (esp. the drumming in "SBS"), and the background musicians are energetic. Even Yoko's "Sisters Oh Sisters" is good; although it's customary to deplore her singing style, this is an outstanding song that hasn't aged in 25 years: I'm surprised it's not being covered today.

The nadir of the album is "Woman...". This is the only bad track on the studio part of the album, but it's awful. Although the musicians play quite well (as on all the tracks), the title is offensive and John's lead vocal is dreadful, far worse in fact than any of Yoko's work on this album. He runs through each line without any respect for meter, rushing to the rhyming end of the lyric so as to make the break on time. It's painful to hear. One imagines that if he were still working with G. Martin or Paul, he could have been persuaded to polish the words so as to make them flow more freely (or, even better, abandon the track completely). Stubbornly, John included this track on his "best of" album, "Shaved Fish", four years later; but if he wanted to include the best track, he ought to have chosen "John Sinclair" or "New York City".

It's a shame that, for most of the tracks, John wasted such great music on such lousy lyrics. With few exceptions, the playing and melodies are equal to anything on "Imagine", but the words are trite, unconvincing, unsubtle, and often just dumb: easily the worst words in all of Lennon's recorded work.

I suppose that's *one* was to summarize years & years of complicated political and cultural struggle! <:^) Still, one wishes that the author of "Across the Universe" and "Working Class Hero" could have been a bit more clever.

That's a blues couplet that's been in use since the turn of the century; it lost its currency probably around the end of WWI. John could have written something better than that. Even worse, he compounds the error in the next line:

"John Sinclair" is an outstanding work of musicianship, but the words ...

And "Woman is the N**** ..." is like this from start to finish. There are far too many gross violations of style to list here!

Most of the songs are like these: one wishes it were possible to turn down the volume on the words and listen only to the excellent instrumental tracks.

Part of the problem with records like "ST" is that, in copying "newspaper format", they inherit newspaper limitations: they get old really, really fast. No one likes to read yesterday's papers, and I imagine that "ST", weak as it was already, was officially killed by Nixon's reelection. But John Lennon was bold, and I doubt that he regretted his experiment: sometimes experiments result in disasters and sometimes in greatness ("SFF", "Day in the Life"). He didn't know that he'd be dead in 8 years and that "ST" would be one of only 6 solo albums (of original material) released during his lifetime.

Another part of the problem with "ST" is that it fails to live up to John's own standards. The words sound awful partly because John's words were usually so *good*. I suppose that if Mick Jagger or Elton John had released this album in '72, the reviews would have been much better (and the sales, too). Are the words really that much worse than "Saturday Night's Alright for Fighting"? than "Brown Sugar"? than "Back off Boogaloo"?

To pursue the point: Not to provoke Paul fans, but compare "ST" to Paul's hit "McCartney" or "Ram" albums. Paul has never claimed to be a wordsmith, and John's lyrics on "ST" are *at least as good* as the words to "Bip Bop" or "Monkberry Moon Delight", and the music is (IMHO) about the same. If we change the standard of comparison, then, "ST" comes out pretty well: it may be disappointing as a John Lennon album, but as a generic example of early 70s rock, it's quite tolerable.

The best parts of "ST" are very very good, while the worst parts are among the worst in all of John's career. So should we take an average and rate the album as mediocre? I don't think that would be fair: Now that we are a quarter-century removed from the events that provided the initial inspiration, "ST" is an entertaining time-capsule of early '70s radical rock. If we can distance ourselves, emotionally, from the political issues, then we can hear "ST" just as we hear "POB" or, for that matter, "Help!", "Norwegian Wood", "She Said She Said", "Julia", or "Dear Prudence": as diary-entries. The lyrics aren't clever but they reveal a very interesting chapter in the life of a rock giant. Remember that John's solo life, like his Beatle life, had many chapters: the anguished "truth teller" of the Beatle years; the rock radical; the debauched LA drunken reveller; the househusband and devoted father. "ST" sheds light on that second chapter.

I like "ST" for the same reason I like documentaries on PBS: it's fun to learn what was on folks' minds many years ago. With the very engaging music and the topical but very un-Lennonesque lyrics, it's a better album than most folks have admitted for the past 25 years. All in all, I like "ST" and I hope others will give it a second chance, too.