In what has to be one of the most macabre and morbid pop incidents, a rumor has spread across North America that Paul McCartney is dead. Furthermore, the story -- which is being circulated by radio stations -- suggests that McCartney left the Beatles three years ago.

The inference, therefore is that the guy in the Beatles who writes songs with John Lennon is not really McCartney, but someone who looks, sings, talks and writes like McCartney did. Apple has emphatically denied the story to about 2,000 trans-Atlantic callers. Less than a month ago when I was at the Apple office in London, McCartney passed within a few feet of me. If it wasn't McCartney, I'll eat a case of apples at one sitting. He was with his wife, and he said, "Hello," and I'll bet any money it was Paul.

The rumor assumed continental proportions in the past week after two Detroit disc jockeys and a rock club promoter launched a crusade to investigate an ancient rumor that Paul had died. They turned up a few sections of Beatles' lyrics which, they said, could be evidence, and part of a grisly plot in which the rest of the Beatles were trying to tell us that something had happened to Paul.

They have also found what they think may be a further clue on various Beatles' album jackets. With the subsequent arrival of reporters from Time and Life, you will understand why the Detroit trio is working even harder on this far-fetched treasure hunt. Radio stations lost no time capitalizing on the rumor. Wherever you go, you hear fans getting on a local station expounding their favorite theory . The way it's going, this could become the biggest kiddies' game since Monopoly.

The three are WKNR dee jays John Small and Dan Carlisle and promoter Russ Gibb. Small has been so busy answering calls from fans and press that he was difficult to track down in Detroit. In fact, it is likely that Small has become harder to locate than "the late McCartney."

"It's all a question of interpretation," he said. "There are some very strange things going, and it's hard to related the symbolism. We're not saying Paul is dead. We think he's alive, but we wonder in what condition. Maybe it's a sick joke by the Beatles."

During our conversation, Small recited the clues uncovered thus far on this mystery tour.

First, you have the Beatles' songs, he says. After listening to almost everything the group has recorded since Sgt. Pepper, Small pointed out a series of possibly related lyrics. I'm not going to confirm or deny any of them, because that, too, is a matter of inerpretation.

Near the end of Strawberry Fields Forever, he says, the line "I buried Paul" is repeated twice. In Fool on the Hill there is supposedly a verse: "Speaking of a dead man, smiling and never changing and never going round." There is also a referenece to "The man of a thousand voices never to be heard."

Quoting from Shakespeare's King Lear in I Am the Walrus: "Is he dead, my father, is he dead? Then bury my body." In Day in the Life, there is a verse about a man who "blew his mind out in a car...people stood and stared. They'd seen his face before? Nobody was really sure."

From within Revolution No. 9, that jumbled stretch of electronic noise and strange voices, Small has uncovered a series of messages:

"He hit a light pole. We better get him to see a surgeon. So, anyhow, he went to see a dentist instead, gave him a pair of teeth that weren't any good at all. My wings are broken and so is my hair. I'm at a loss for words. Find the night watchman. A fine natural imbalance. Must have got it between the shoulder blades."

But that ain't all. If you play Revolution No. 9 backwards, Small says an English voice cries out: "Turn me on, dead man."

Then you move on to Glass Onion where you hear the trio's really heavy stuff. "I told you about Strawberry Fields. You know the place where nothing is real. Well, here's another place you can go, where everything flows. Looking through the bent-backed tulips to see how the other half lives. Looking through a glass onion. I told you about the walrus and me, man. You know that we're close as can be, man. Well, there's another clue for you all: the walrus was Paul."

According to Small, the direct Greek translation of glass onion is the knob of a coffin; and "an onion is a vegetable."

"Notice the four guys crossing the road. The first is a white Christ figure: then comes the minister in black: then an out-dated corpse -- Paul in suit but no tie, short hair, no shoes and a cigarette in the wrong hand. The lack of shoes is symbolic in the modern Greek sense: the Greeks place the corpse's shoes beside the casket.

"Then look at the white Volkswagen with the number plate. 28IF. Paul would be 28 this year. On the left is a cemetery and on the right is Paul's house. Down the road is a police hearse."

The Magical Mystery Tour cover is quite a colorful mishmash of symbolic photographs, and Small has really dug heavily into it:

"Paul is dressed as a soldier in one of the pictures, and there's a sign on his desk reading 'I was.' There's another picture with four police on a wall guarding a scene in which all four Beatles are surrounded by dozens of surgeons. All, except Paul, are in white coats. He is in black. In yet another picture, the four Beatles are in white tails with red carnations. Paul wears a black carnation.

"On the front of Sgt. Pepper, it looks as though everyone is gathered around a grave. Paul is there with a man holding his hand over Paul's head. In Greek and Indian cultures that gesture implies the curse of death.

"You'll find McCartney is holding the head of a baby in his lap and he's covered with blood and meat. He has his hand over the baby's head as well. Capitol had to withdraw that cover because of the protest, but as a replacement it issued a cover which looked like Paul was sitting in a suitcase. When you turn that on its side you'd swear he was sitting in a casket."

Copyright by the Globe and Mail, 1969. All rights reserved.

And here is the announcement that Paul is "alive and well" which appeared in the Globe and Mail on October 23, 1969, page 14... 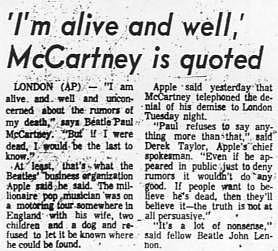