In an e-mail correspondence dated December 6, 2002, to the Ottawa Beatles Site,
Jean-Pierre

Finally, attached is the scanned photo of the John Lennon Wall in Prague,
circa July 20, 2000.

There are numerous sites under Google, for the John Lennon Wall in Prague -
History.

One of them is wonderful as it gives you many pictures of the city, from
which I have cut and pasted a paragraph:

As you wander through Mala Strana's ancient history, strolling down twisting
alleyways and into quiet corners, a surprise awaits you in Grand Prior's
Square across from the French Embassy. It is the John Lennon Wall covered in
twentieth century graffiti. Lennon was a hero to the pacifist youth
subculture of Central and Eastern Europe during the Communist period.
Spurred on by the words and lyrics he wrote, they came to paint on the wall
their own feelings and dreams. They waged a small war of their own with the
police who cleaned the wall of their subversion, but they came back again
and again to protest in the only way possible. Next to a freely drawn
portrait of Lennon are the words, "People don't die, they turn into
flowers."

The short history of the wall is below. Sad, by visiting this site just now,
it appears that my picture below, taken in 2000, is ancient since the wall
has again been re-painted, this time green. 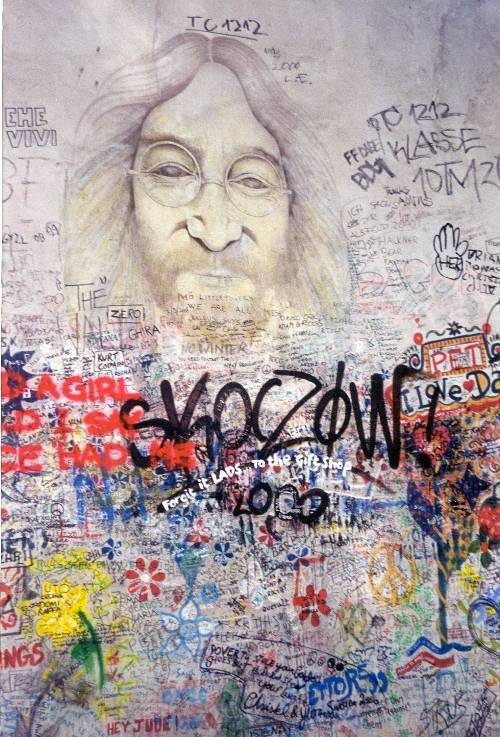 The Ottawa Beatle Site wishes to give special thanks to Jean-Pierre Allard for allowing us to e-publish this very lovely photo that his wife Catherine took of the John Lennon Wall when they visited Prague with their daugher Christiane. This photo is copyrighted by Jean-Pierre and Catherine Allard, July 20, 2000, all rights reserved.  Unauthorized reproduction and use of this photo is strictly prohibited.