Punk Opera Che Lennon by The Oz from Russia

There is a refreshingly new and exciting cacophonous sound that is emerging from the former Iron Curtain. It is a punk rock band from Russia called "The Oz."  They have released their debut CD called "Che Lennon." The CD are cover versions of John Lennon's solo career. Inserted between the cover tracks, are Lennon's philosophical musings which becomes the backdrop in creating a biographical journey on the late pop star's life.

So, who exactly are the band members for Oz? The vocalist for the group is Igor Salnikov; Guitars are handled by Vladimir Zhidovchits; bass guitar is handled by Alex Leonov; on drums Illya Ivakhnov. John Lennon philosophical musings are eloquently spoken by Lee Williams. The band uses several other musicians that guest star on the album that handle vocals, grand piano, cello, violin and string arrangements.

All of the music was recorded in St. Petersburg, Russia, during the period of 2005 to 2007. What will impress most listeners is the continuity and style of each performance...this band gives you 110 percent effort in every track. The energy level and enthusiasm are there which is something you don't hear too often from other bands these days (think back to the Beatles "Abbey Road" where the Beatles made each and every track sound as fresh and new while playing together as a cohesive unit. You have the same approach here coming from The Oz.)

The Oz explains in their liner notes about the Oz-some album: "We like it too, 'cause we spent some 3 years working over it and we never played this kind of music before but we just couldn't help 'repunking' some revolutionary John Lennon tunes for we loved his stuff and honestly hated all the KAPITALISTIC crap that they try to brainwash everybody with...So what you do if you LOVE Lennon tracks and HATE Corporation tricks? Yeh, Right ON! That's what we did Punk-Opera "Che Lennon."

"It's all about true LOVE, HATE, REVOLUTION, EVOLUTION, etc."

The album starts off with rainfall and what sounds like the charming bells of the London Tower. Then, after a short Lennon maximum through the use of spoken words entitled "Cynic?", the segue way cues up the listener with "Stranger's Room" (true title: "I'm Losing You" from Lennon's "Double Fantasy") with piano and vocal accompaniment done in a slow tempo. It is then followed up with "Serve Yourself."  Had he lived, one wonders what Lennon would have thought of this progressive punk band's version of "Serve Yourself" which he never really recorded properly for commercial release. The Oz does a terrific job on this track, making the song truly their own special version. Simply put, this number rocks! 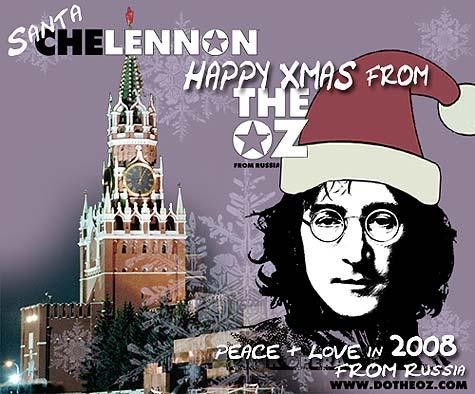 The next track track up is "Working Class Hero." This is an upbeat tempo presentation from the Oz that sounds something similar to what the Boomtown Rats would do. It's the only way to describe it, but it works and it works very well here for The Oz.  More spoken Lennon maximums are heard against the sound of rain to cue the listener up for the next track. The title for this spoken passage is called "A Free Speaking Country?"

"Give Me Some Truth" -  Heavy melodic bass lines, drumming, excellent guitar work and vocal prowess makes this a "head-on" performance from The Oz. They tackle the job and do it very well.

"Crippled Inside" - Excellent honkey-tonk piano playing makes this revved up version a joy to listen to. In some ways, even better than the original Lennon release, with fun stuff thrown in to take off the serious edge to the lyrics and makes the actual performance a fun romp.

Deliberate or not, during the "a very Merry Xmas and Happy new year, let's hope it's a new one without any fear" refrain, the lead vocalist sounds very much like an impersonation of the late President Richard Milhouse Nixon of the United States. It was Nixon who, towards the end of the late 60's increased the bombing campaigns in Cambodia during March 1969 and who had secretly bombed Laos which only escalated the conflict there.

"Power to the People" - Think back to American native war chants and you pretty well have figured out the direction of this song. Very powerful, very uplifting cover version. The track is cued up first with another Lennon philosophical musing about left wing radicals and how he supports their causes. The interview is called "Paint It Red."

"Do the Oz" - The cover version presented here is likely the bands swan song, after all, they are The Oz! Once again they have taken an obscure Lennon tune and have made it sound more like something that Davie Bowie would do on one his own albums. It works though and you can tell the band is having fun performing it.  The track is first cued up with more philosophical musings called "Oz Undergrounds." 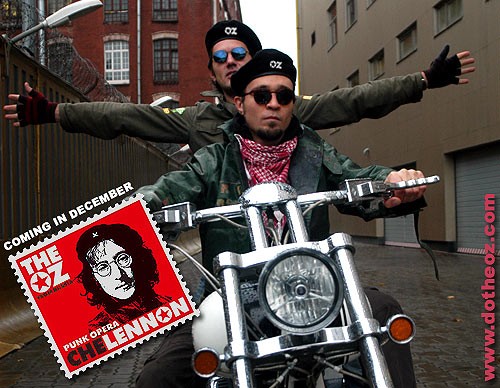 "Oh, My Love" - This lovely song harks back to Lennon's "Imagine" album which was released on September, 9, 1971, in the United States. The Oz track is commercial enough to be considered for a single release. It starts out very gently with a beautiful piano piece which reappears later in the song. In between that, the middle eight becomes progressive punk rock and it works well with the passionate vocal accompaniment.

"Attica State" - Here is song that is not always covered often by different artists. The song is from Lennon's "Sometime In New York City" album. Lennon always said that if you put a strong back-beat to any song, then you can make it rock -- and this is what Oz drummer Illya Ivakhnov does on this recording. Lots of high-energy performances from the other band members makes it one of the most solid rockers found on the album.

"Cold Turkey" - First impressions from this track will be the vocal treatment as performed by Igor Salnikov. There is a believability factor here in the vocal delivery that goes beyond description. Let's just say that Igor's is very convincing, sounding like the singer himself has just come through his own "Cold Turkey" experience, the withdrawal symptoms of drug abuse. The band supports Igor very well on this track.

"God" - This recording starts off gently enough and then slowly becomes more progressive when the lead vocalist and the band goes through Lennon's litany of "I don't believe in magic, I don't believe in I-Ching, I don't believe in Bible...." It ends up being a heartfelt rendition making it commercial for listeners. The InnerLights Exposition website who is backing The Oz in the promotion of this new CD, claims that Oz's version of "God" has gained acceptance: "Thousands of listeners from all over the world have already noticed the absolute uniqueness of this interpretation."

The CD concludes after this track with one last Lennon philosophical musing that is spoken by Lee Williams which is entitled: "And That's What It's All About."

In conclusion, The Oz certainly deserves the attention of the Western media. The band members are indeed very talented and what they present here on "Punk Opera Che Lennon" is a fusion of their talents.

One wonders what direction the band will take in their next CD release. One thing is certain, it will be very hard to duplicate concepts of "Punk Opera Che Lennon."  This is such a unique and special album to begin with.

What made the Beatles a very successful as a band is that for every album released, there was a 360 degree change in approach and style. In Oz's case, they might consider doing a variety of well-known protest songs (composed by other artists) from the 60s for their next offering.

That said, the Lennon cover versions have certainly made this reviewer take notice of this excellent punk-rock band from St. Petersburg, Russia.

Visit the Oz at http://www.myspace.com/dotheozrussia where the band has already had up to 61,937 page views.