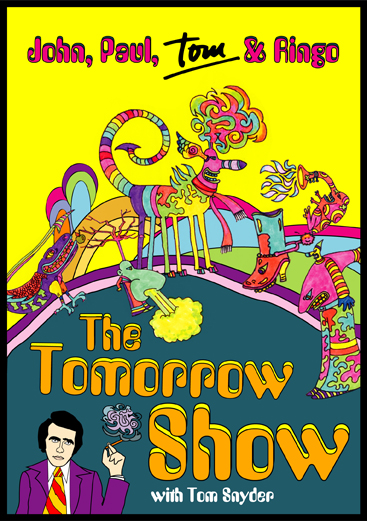 This new DVD release from Shout Factory contains interviews with three of the four Beatles, John, Paul and Ringo. They were all interviewed by Tom Synder who hosted The Tomorrow Show on NBC television which ran in the United States from 1973 to 1982.

John Lennon was interviewed by Synder on April 25, 1975 (and re-broadcasted again on December 9, 1980) and is the best one of all the three interviews found on this DVD package. The reason why this interview turned out so well is that the questions and answers given are very relevant to Lennon's situation up to that point in time. Shortly after this broadcast, Lennon would disappear from public life taking on the role of "house-husband" and raising his son, Sean.

The Lennon television interview is the last one ever given by the pop star. He discusses a variety of topics from the influence of rock and roll, to the bands legacy, drugs and the Beatles break-up. Towards the end of the interview, Lennon's immigration attorney Leon Wildes, makes an appearance with Lennon to discuss the tricks and traps that the American political and justice system have been trying to impose on the rock star in order to have him deported out of the United States. The discussion is fascinating even though, up to the time of the broadcast, Lennon did not know what the final outcome would be as to whether he would be able stay in the United States.

The re-broadcast version of the Lennon interview contains candid discussions from journalist Lisa Robinson, writer for the New York Times Syndicate who had personally interviewed Lennon. Jack Douglas, music producer for Lennon's "Double Fantasy" album also made an appearance on the show. Their thoughtful insights provide the viewer with the current state that Lennon was in prior to his untimely death.

Paul and Linda McCartney were interviewed by Snyder on December 20, 1979. The interview takes place around the time of the release of "Back to the Egg" album as well as their concert to a sell-out crowd at the Rainbow Theatre in London that night. Featured in the Tomorrow Show is the "Spin It On" promotional film that the McCartney's made to go with their "Back to the Egg" LP and B-side single (the A-side was "Getting Closer" released on June 5, 1979, in the USA.)

The interview is what one would expect from Paul and Linda -- all about music and family values. Paul explains about the genesis of his group Wings and how they toured on a bus doing small gigs in order to help build up the band's identity.

Linda talks about her musical abilities and how Paul convinced her to join the group. She also reminisces about their kids and how she and Paul originally first met each other in London while on a photographic assignment, down in a club.

The couple talk about complexities of fan reaction to Wings and how maintaining a farm up in Scotland with horses and 300 sheep provide a nice form of escapism from their pop successes.

Paul explains how he was approached by Kurt Waldheim, Secretary-General of the United Nations to do a special charity concert for the people of Kampuchea (Cambodia) where Wings appeared on December 29, 1979, at London's Hammersmith Odeon.

Denny Laine and Lawrence Juber are interviewed with Snyder asking the obvious question as to how these two musicians ended up working with Paul and Linda McCartney.

Ringo Starr and his wife Barbara Bach were interviewed in Los Angeles on November 25, 1981.  The interview comes at a time when Ringo began promoting his new album, "Stop and Smell the Roses."  The Snyder show includes the promotional video for the album, "Wrack My Brain" which was composed by former Beatle-mate George Harrison.

Snyder explores the significance of the album title "Stop and Smell the Roses" while using as a backdrop to the discussion, the fact that Ringo is now hitting the 40-years-of-age threshold. Ringo responds that 30-years-of age was worse than being 40. At 40, he is feeling better. But the simple message is to "Stop and Smell the Roses" in your life and not to go "head-long" in your life's journey said the former Beatle.

Production of the album took a year to complete. The reason being that the recordings took place in France, Hawaii, the Bahamas and Los Angeles, depending on which artist Ringo had to work with to produce a track.

The interview covers several movies that Ringo acted in: "Listomania" where Ringo played the part of a Pope and "Caveman."  Ringo explains what happened to "Son of Dracula" (released by Apple films, 1974, directed by Freddie Francis which featured Harry Nilsson) and that it was not any where as good as a film like Mel Brooks "Young Frankenstien" which came out in the USA on December 15, 1974.

Snyder explores Ringo's drumming ability. Ringo responds in the interview with "I am a great rock and roll drummer." He was very surprised to discover back in the 60's, that many American drummers were trying to impersonate his style of playing on their own drums.

Barbara Bach is brought into the show and discussion begins about pop star's real name, "Richard Starkey" and his stage name, "Ringo Starr." Snyder was able to souse out from Ringo that the story is true, that his stage name came from his fascination of jewelry and cowboys. His name was picked for professional reasons.

The interview basically ends on reviewing what both Ringo and Barbara Bach's immediate plans are for the future.

Overall Comment: The DVD is worth getting, if only for the terrific interview with John Lennon.