THE BEST OF FELLAS -- THE STORY OF BOB WOOLER

Imagine my surprise when on the same day after buying George Harrison's "I, Me, Mine" at Chapters book store, I come home and I find that Spencer Leigh's book, "The Best of Fellas - The Story of  Bob Wooler"  had arrived in my mail box!  I decided to put "I, Me, Mine" aside for the moment and get right down to reading the fascinating legacy of the Cavern DJ, Bob Wooler. 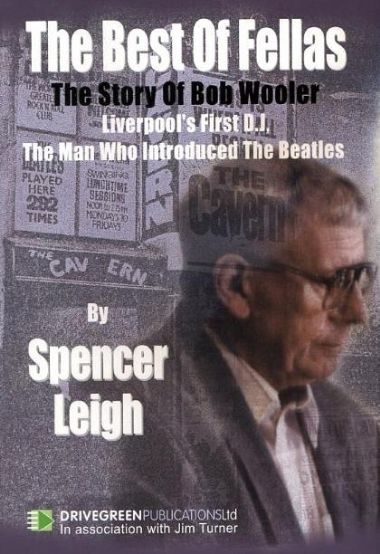 I'm quite impressed with Spencer Leigh's abilities in doing research, not to say the least, his writing style as well. Here are a couple of things Leigh managed to unearth for Beatle fans, some of which you may or may not have known before...

ON THE ISSUE OF AMERICAN BLACK MUSIC:

Spencer Leigh has managed to come up with empirical evidence (which is presented in the book) that the "Cunard Yanks" (people who came over on the ships to Liverpool who had family and friends living in and around the seaport) were not responsible for bringing over the vast majority of American "beat group" records to Liverpool. These would be the cover versions that the Beatles and other Liverpool groups would end up recording. Leigh writes that "American black music" was obtained in the Liverpool music stores almost as quickly as the American marketplace had released them. Bob Wooler had long suspected that this was so, and Spencer Leigh went out of his way to confirm it.

The story of the "Cunard Yanks" bringing over American beat records is nothing more than an "urban myth" that was built up over time by the media.

ON THE ISSUE OF WHO COINED THE PHRASE "BEATLEMANIA":

Spencer Leigh is man after my heart regarding this particular area of research: He has discovered that the word "Beatlemania" was actually coined prior to Fleet Street's announcement. In his book, "The Best of Fellas", Leigh does identify the name of the person (with some supporting evidence) as to whom might have been responsible for "coining" the phrase "Beatlemania". Without giving the whole story away here, I will say that it was coined under the oddest set of circumstances least likely to have been imagined by Beatle fans! And there is some conjecture made after the fact by Leigh: He suspects Fleet Street caught hold of this person's particular "testimony" that caused the press to home in on the phrase "Beatlemania" and was used thereafter in their news reports as a way of describing the wild fan reaction to the Beatles. Leigh sort of "connects-the-dots" as it were with fact and conjecture, thereby making probable sense for the reader.

ON THE ISSUE OF "RAYMOND JONES", THE YOUNG MAN WHO WENT INTO BRIAN EPSTEIN'S STORE AND ORDERED "MY BONNIE":

It appears that "Raymond Jones", who asked Brian Epstein for the record "My Bonnie", is indeed alive and well and living in a farmhouse in Spain! Through information provided by Bob Wooler, Leigh managed to track down Raymond Jones and interviewed him for a spot on the "BBC Radio Merseyside" and Raymond's testimony is found in the book. During the interview, Raymond Jones explains why he is annoyed with Alistair Taylor's recent accounting of the events in the media. As fans will recall, Alistair Taylor, who was Brian Epstein's personal assistant at the time, has claimed that the fictitious person, "Raymond Jones", was himself and that he just made up the name so that Brian would order copies of the Beatles single called "My Bonnie". Brian Epstein did indeed end up ordering copies of "My Bonnie" which is supposedly how Mr. Epstein first became aware of the Beatles.

With this information put forward by Spencer Leigh, as a researcher myself, I no longer know what to make of this particular period of the Beatles history. For me, it has always been a problem when people come forward 30 years later and for the first time, report these kinds claims -- unfortunately, both Alistair Taylor and Raymond Jones have done just that by putting themselves right into the firing line, so-to-speak, with still a lot of questions left unanswered. Will we ever be able to make a proper determination as to which story is true? I don't think so but Bob Wooler seems convinced that the person he identified is the real "Raymond Jones".  Leigh, remaining true to his journalistic instincts, has "fleshed out" as much research and information in this area as he possibly could find. The book also includes an old picture of what this "youthful" Raymond Jones looked like in the early 60s...it's in the book on page 165, looking sort of like a "James Dean" character!

Anyway, the reader can make their own determination on this whether Raymond Jones is to be believed more than Alistair Taylor's story. (Oh, and my own "gut feeling" on this one is that both Bob Wooler and Spencer Leigh are correct!)

About 90 percent of "The Best of Fellas" contains actual testimony from Bob Wooler himself. For his part, Spencer Leigh put down his own commentary from time to time -- sort of like a "historical annotation" to keep this book as accurate and relevant as possible for the reader. The remainder of the book is interspersed with interviews from other musicians and managers who participated during Liverpool's beat scene. Beatle fans will also be pleased to learn that Beryl Wooler, Bob's ex-wife, also made significant contributions for the book. So too did the Beatles first manager, Allan Williams. And then there are a plethora of Bob Wooler's own personal lyrics he had written over the years and lots of Bob's own "Woolerisms" that are hilarious to read which truly embellishes the book.

How best to summarize the "Best of Fellas"?? Let me tackle that question by comparing the "Best of Fellas" to two very different publications: You recall UNCUT magazine's recent edition, entitled "The Beatles - The Complete Story" which listed all of the New Musical Express editions that came out throughout the 1960's on the FABS, right?  If you agree that assembling those articles together was a pretty amazing feat of accomplishment for the editors of UNCUT, then you will be equally amazed with Spencer Leigh's research for this new book which contains lots of first-hand testimony, facts and historical dates...Leigh's research for this book is indeed, impeccable!! I can only equate the caliber research along the same lines to that of the UNCUT publication. Seems odd to equate a magazine to a book but that's exactly what you will get: "The Best of Fellas" is such a treasure trove of excellent information!

Regarding the writing style, Bob Wooler's very own words convey a "as-you-are-there" style similar to Allan William's book, "The Man Who Gave the Beatles Away", but the big caveat over the Allan Williams book is that Bob doesn't embellish or exaggerate the story like Williams had done a few times in his own book. As Bob Wooler once said: "BW: Truth Sleuth - The horse's mouth & NOT the other end of the horse. Exposing baloney phonies and their 'Fabrications' Learn how it REALLY was." Bob did just that in "The Best of Fellas - The Story of Bob Wooler".

Finally, Beatles fans owe a great deal of indebtedness to Spencer Leigh's own persistence in interviewing Bob Wooler. Spencer had quite a time in procuring the testimony from Mr. Wooler. It seems that Bob would play the game of "bad cop" / "good cop" during the interview...one day Bob Wooler would want to tell his story and other times he guarded his answers or didn't want to be involved at all with the project. This made Spencer's job of interviewing Bob Wooler, a very difficult task to do at times. But to Spencer Leigh's credit, he managed to overcame those obstacles, persevered and assembled all of the facts together for Beatle fans and music historians. "The Best of Fellas - The Story of Bob Wooler" will be forever revered as a vital book on the early history of the Beatles and Liverpool's music scene and is definitely a must-read for any true Beatle fan!

Thank you, Spencer, for putting this book all together. After reading it, I am convinced that if Bob Wooler were alive today, he would be more than pleased with the outcome of your book!


Personal memoirs of Bob Wooler by Joe Robinson with information on how to order the book: http://www.ncf.ca/beatles/robinson.html

Book review: PORTRAIT CAPTURES THE WIT AND WISDOM OF A CAVERN LEGEND, by Philip Key of the Daily Post.

In Bob Wooler's own words: I AM THE DJ: AN INTERVIEW WITH THE CAVERN'S BOB WOOLER,  by  Gillian G. Gaar, of Goldmine Magazine, November, 1996.

And yet another interview: BOB WOOLER, CAVERN KING, by Record Collector, July, 1998.

IC Liverpool's report on the Bob Wooler Tribute: THE BEST OF FAREWELLS, January 13, 2003