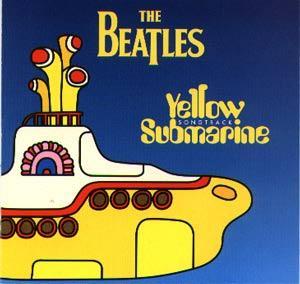 YELLOW SUBMARINE
By Martin A. Grove
from his excellent book, "Beatle Madness" published by Manor Books, 1978.

Cast: The Beatles (animated and, in a brief end sequence, live); and the voices of Dick Emery, Lance Percival, Paul Angelus and Sheila Danille.

Reviews: Although Yellow Submarine did not do terribly well at the box office, it was well received by the critics. Most reviewers contrasted its style of animation with the older and more traditional Disney style.

Disney's style of animation was based on the use of circles, which enabled his characters to move by rolling. This is easier to achieve than the movement of angular or rectangular forms. Producer Al Brodax was quoted in an interview as explaining, "The figures [in Yellow Submarine] are wildly distorted, thus difficult to move. Circles move easily; they roll. Rectangles just bump along. It took six weeks to devise a method to make them move and we were, at first, only partially successful. John, Paul and George finally began moving, but Ringo appeared to have a limp. It took another six weeks to adjust the optics and modify drawings in order to get Ringo moving properly."

Daily Variety's reviewer, Rich., predicted (7/23/68) that, "The pic should be a sure click with Beatles' fans and the youthful 'pop' audiences and also intrigue those who sometimes tut-tut the remarkable combo's more way out activities."

He added that, "George Martin, the Beatles' musical director, has done a smoothly elegant job with the cleffing and the songs come to life with the visual verve as well as being easy on the ear."

In The Hollywood Reporter (7/23/68) John Mahoney wrote that, "Generally, the film captures the Beatles' style of punning humor and non-sequitur even more vitally than their live action features."

He commented that, "by assigning individual directors and animation units to a dozen Beatles' songs, which in effect compromise the plot of Yellow Submarine, the film acquires an exciting variety of visual textures and styles. It also gets stuck with no less than four anti-climaxes which make the latter portion of its brief 87 minutes painfully long and pretentiously cute, overplaying its own invention."

In his view, "George Martin's musical direction and electronic wizardry is a marvel." He pointed out that, "It has been said that the British quartet do not speak their own dialogue in this film, but the aural likeness is so close that it is hard to believe."

Cue magazine (11/16/68) called the picture "delightful to watch," and said that "What distinguishes Yellow Submarine, with songs by the Beatles adding merriment to the charm of their cartoon likenesses, is a gloriously conceived mod look of the 1960's." Renata Adler, movie critic at the time for The New York Times, observed (11/17/18) that, "It is a delicate, friendly, unpretentious film -- which, if it did not have the imprimatur of the Beatles, with their special talent, power and grace, would be of no great importance."

She also addressed herself to the picture's relationship (if any) to marijuana. "It is the perfect film, I think, for children, never terrifying, often funny, sometimes inspired and yet (or maybe, and so), there is the matter of pot," she wrote. "There is no question that Yellow Submarine (and a lot of totally undistinguished movies, like the Monkees' recent Head) are to a certain extent informed by marijuana, and that regardless of what its legal implications are, its esthetic importance is becoming more than marginal."

That same point was tackled by Richard Schickel in his Life magazine review of the movie. He commented that, "Some college kids have recently told me that the only way to appreciate Stanley Kubrick's 2001 fully is to go into the theater stoned and dig it as a light show. That may be so, but Yellow Submarine needs no such artificial flavoring. Indeed, it might very well blow a mind that approached it high."

To him, "the most important thing about Yellow Submarine is its wondrous visual freedom. I suppose you could say its basic style is psychedelic."

He explained that, "What is unique about the Beatles is that they have standards: they did not accept just any old animation. Instead, they have put their name to a film that may rescue this great art form from the doldrums in which it has so long languished, at least in the West."

Les Schwartz reviewed the film for the Motion Picture Herald (10/30/68) and labeled it "something that is so far removed from just about anything anybody has ever done that indescribable is the only way to describe it. There is so much happening in the turned-on world of Yellow Submarine that one can only smile from ear to ear and stare in the wide-eye wonder at the animated exploits of the four hip Britons."

He did point out that "actually, the Beatles themselves had little to do with the technical craftsmanship that distinguishes this film. But they provided the inspiration, the tone of humor, 11 songs (three new ones) and their all-important physical forms..."

Many of the critics addressed themselves to the style of art employed in the movie. The Los Angeles Times' Art Editor, Henry J. Seldis, reviewed the film (11/15/68) and said that it "adds up to a thoroughly Surrealistic experience not only through the recognizable graphic roots provided by De Chirico, Dali, Magritte and Ernst, but by its overabundance of visual and verbal puns." To him it was "the most stupendous animation feat in decades."

Time magazine (11/22/68) was in the minority in calling the film a "Bad Trip" in its headline. Its review complained that "the score includes several hits by the Beatles and just as many misses. The plot and the animation seem too square for hippies and too hip for squares."

In Time's view "ultimately, however, what is wrong with the film is the Beatles. They are not in it. Except for the songs and a final sequence in which they appear live in some drab sing-along footage, they had nothing to do with Yellow Submarine. All but the most confirmed Beatlemaniacs can profit by their example."

Writing in Films and Filming David Rider pointed out that, "The Beatles themselves are beautifully designed and animated but their speaking voices are supplied by actors, who get remarkably close to the laconic, throwaway style exemplified in their live-action films."

He thought that "the virtues of Yellow Submarine far outweigh its vices of excessive length, occasional evidence of haste and an indecisive ending." In this view, "with the name of the Beatles attached to it, Yellow Submarine is at least assured of drawing the audiences into the cinemas."

The New Yorker's Pauline Kael agreed that while "The Beatles' non-singing voices are not their own...they're good." She wrote that The Beatles are "no longer the rebellious, anarchistic Pop idols that parents were at first so outraged by; they're no longer threatening. They're hippies as folk heroes, enshrined in our mythology."

She observed that the picture "uses Pop heroes and Pop Art deliberately, and with sophistication. And it works." Charles Champlin, entertainment editor of the Los Angeles Times, reviewed the picture (11/15/68), finding that "there has come to seem no limit to the magic the Beatles can produce,or inspire others to produce." He felt that "the impact and the pleasure of Yellow Submarine is still more visual than musical." In his opinion, "when the Beatles show up at the end in plain old photography to warn that the Blue Meanies are among us all the time, ready to pounce whenever we skimp on love or song, it's a plain old let-down and whoever would have thought of it?" 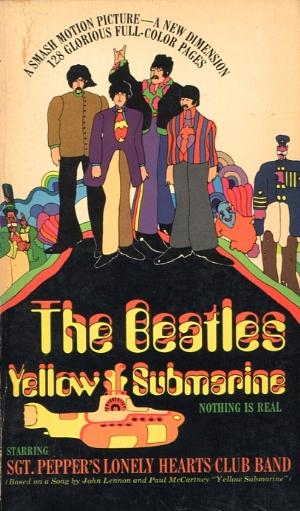 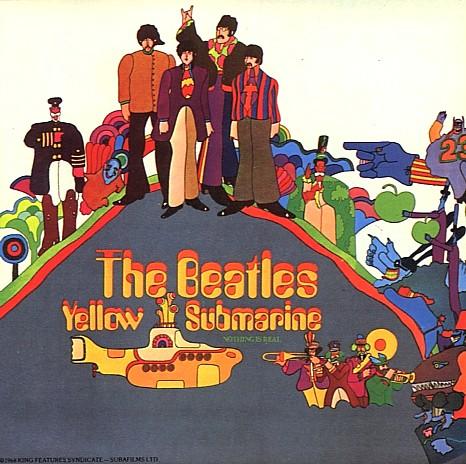